A new must-read book for decision makers, donors and everyone else dealing with one of the worst man-made disasters in modern history. 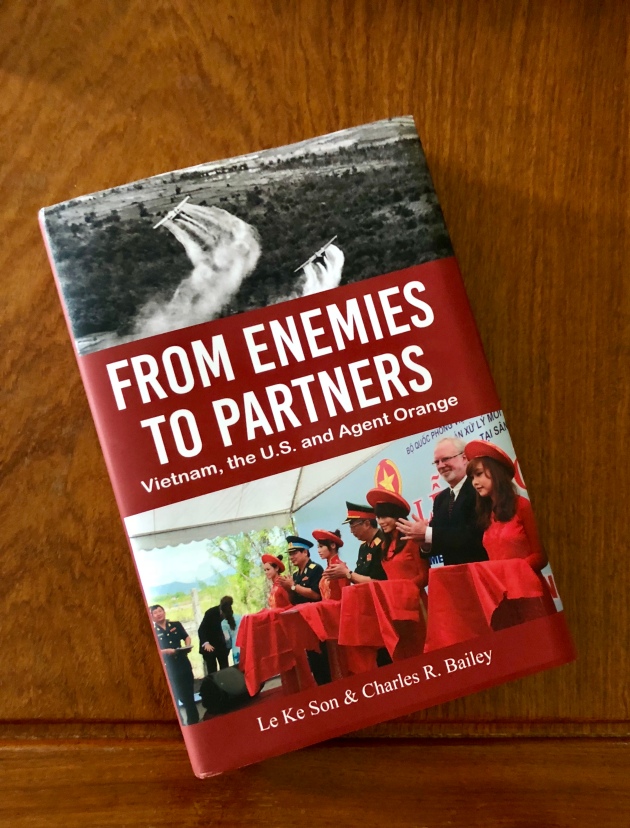 How do you cope with a tragedy of epic proportions – a tragedy engulfing some four million people, who have been exposed to Agent Orange in Vietnam? How do you bring an end to a manmade disaster, which erupted five decades ago and still claim victims among the poorest of the poor in Vietnam as well as among veterans and their families from the US and other foreign troops serving during the war in Vietnam?

The answers to these complex questions are now at hand from two key actors in the efforts to secure assistance to victims as well as cleaning up the remaining dioxin hotspots in Vietnam.

Vietnamese toxicologist Le Ke Son and US Dr. Charles R. Bailey have joined hands in producing the most comprehensive account so far of the Agent Orange issue in their new book: “From enemies to partners – Vietnam, the U.S. and Agent Orange.”

During the war,  some 72 million liters of herbicide were sprayed by the US Airforce in order to defoliate the jungle and destroy the crops in areas, where the farmers were suspected of supporting the insurgents and the North Vietnamese troops operating in the South.

Son and Bailey have been deeply involved in the efforts to deal with all aspects of the deadly legacy of Agent Orange – Dr. Son as a leading medical expert on the Vietnamese side, Dr. Bailey as director of Ford Foundation Vietnam, distributing millions of dollars in support of Vietnams Agent Orange victims.  Bailey is also well known for his successful lobbying efforts in the US congress to secure financial assistance to deal with the Agent Orange issues.

So far the US has provided USD 231 million in direct financial assistance, since Agent Orange ceased to be a taboo issue in the relations between the US and Vietnam. Most of the funds have been spent on cleaning up two of the three heavily contaminated hot spots, the former US air bases in Phu Cat and Da Nang.  The worst and biggest hotspot at the former airbase in Bien Hoa remains to be dealt with.

In 10 chapters Son and Bailey provide well founded answers to the questions, most often asked about Agent Orange. Here are some of them:

The approach of Son and Bailey is factual and somber – no pointed fingers or dramatics are needed here. The facts themselves are frightening, indeed.

The book stands out as unique and important documentation how Agent Orange is being dealt with in Vietnam and in the US.  The cleanup of Phu Cat and Da Nang has been succesful, and some assistance has reached victims, primarily in the more easily accessible urban areas of Da Nang and elsewhere.

Ahead lies the daunting task of cleaning up Bien Hoa, now a densely populated area,  including 20 lakes with persistent high levels of dioxin contamination in the food chains. The US has committed to assist in the clean-up, which is expected to take a decade at a cost of USD 800 million.

Son and Bailey also point out a very important shortcoming in the assistance: That little or no assistance reaches the most vulnerable victims in remote rural areas in the Central Highlands. I saw exactly the same during a number of visits I have made over a recent five year period to the victims.  More info on this aspect is available in my essay: Letter to Obama.

With their book, Son and Bailey have not only delivered very important documentation on the tragedy of Agent Orange. They have also included suggestions for future systematic action to deal efficiently with the aftermath of the ecocide, which descended on Vietnam during the war.

Therefore, “From enemies to partners” deserves the widest possible reading among decisionmakers in Vietnam and the US, the donor community and everyone else for that matter.

TODAY, I HAND OVER MY BLOG TO INVESTIGATIVE JOURNALIST YEN DUONG AND HER TRULY DISTURBING REPORT ON THE INCREASING WOMEN AND GIRLS TRAFFICKING FROM NORTHERN VIETNAM TO CHINA.