John Balahan/Tao Te Ching: “Be as careful of the end as you were of the beginning.”

John Balaban is back in town
One of the greatest things about living in Hanoi is the fascinating visitors who come back again and again. Yesterday, American poet John Balaban stopped by at Nguyen Qui Duc‘s Tadioto on ‘his last visit’ to Vietnam.
“I am in reasonably good health, but I got one machine now running my heart and another one running my knee,” John said with a very healthy grin and added a quote from Tao Te Ching: “Be as careful of the end as you were of the beginning.”
Like most of us in the audience, John got Vietnam under his skin as a young man, starting with being a conscientious objector to the war in Vietnam. He went on to become a relief worker during the war, taking care of wounded children, getting himself wounded in the process.
Balaban also set out to collect and preserve the Vietnamese folk tales, which have been handed down verbally from generation to generation. Through Balaban’s translations some of Vietnam’s finest poetry have become available to all of us.
His own 12 works of prose and poetry are legendary gems in world litterature. ‘Remembering Heaven’s Face’, and ‘After Our War’ just to mention a few.

At Yesterday’s Hanoi event, John’s long time friend, journalist et al, Nguyen Qui Duc displayed his excellent interviewing skills in prompting John on a far reaching adventure into war, peace and poetry of the finest kind, throwing in some Gloria Emerson and her love for Graham Greene – and a spice of sexual connotations in fluent Vietnamese.
Romania encounter
My personal clue yesterday flashed like a tracer round, when John spotted me with a “We have met before!”
We had indeed met, 29 years ago during the Romania revolution (or whatever it was).
John and I had ended up in the city of Cluj, where angry people were stringing up members of Securitate, dictator Ceausescu’s hated security forces. I still have the shoulder strap from one of the Securitate uniforms, given to me by one of the anti-Ceausecu activists ‘as a souvenir’.
John and I bumped into each other in front of the house of a famous Romanian writer, who had just been released from jail. We must have exchanged a few words, but I only remember how it incredibly cold it was that day in Cluj, and how good half cooked potatoes taste for dinner, when you have not eaten anything serious since yesterday morning.
John collapsed a little later and ended up in surgery at the hospital in Cluj.
“I got the best of care, because the doctors were too scared to have an American die at the hospital,” John says with that healthy grin, he is wearing these days.
Yesterday, John Balaban offered this exit advice, a quote from Vietnamese poet, Hồ Xuân Hương: “Where is Nirvana? It is here – 9 times out of 10.”

A manmade, magic cloud has descended in Yen Bay, among the mountains in a remote province in Northern Vietnam.

It was like the ancient rainbow legend come true: At the end of a long, dusty drive through northern Vietnam the Crystal Cloud was waiting for us on a plateau, built on Mam Xoi Hill.

The beauty of the landscape itself is absolutely breath taking – so much that the manmade Crystal Cloud has become a subject of controversy.

“Why spoil the beauty of our homeland with this kind of foreign invasion?” That’s just one of many facebook comments, after the Crystal Cloud became accessible to the public this weekend. 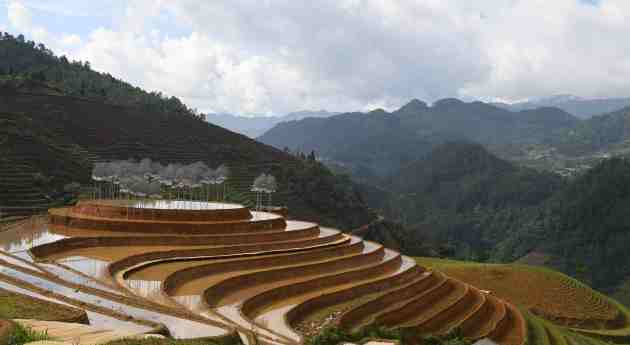 After exploring the Crystal Cloud in early morning and late afternoon, I see it differently.  I see it as a gift to Vietnam, a token of admiration for nature itself, given with respect for the Vietnamese people, including the Hmong tribes who have cultivated and shaped these mountains for centuries.  In a sense, the Crystal Cloud is not the first manmade intervention in Nature’s beauty, it is a continuation of a long Hmong tradition. 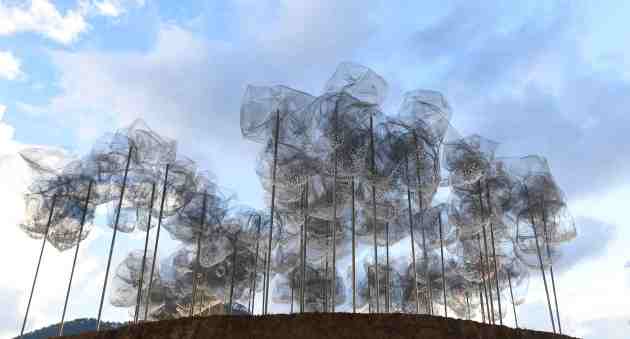 The Crystal Cloud is created by two young landscape artists,  Vietnamese-American Andy Cao and French born Xavier Perrot.  They used galvanized wire mesh, adorned with 58.000 Swarowsky crystals. Whenever the sun rays hit the crystals they set off a firework of colors.  So beautiful that it brings tears to your eyes.

The Crystal Cloud came into being with support from Vietnamese architect Pham Duong and the Architects Association of Yen Bai province.  According to the local villagers, it took about a month to build the installation.

My Nikon and I have no chance to recreate the beauty, but I did what I could with these images. I hope they can inspire you to go see for yourself.  The Crystal Cloud will be waiting for you until 5 October. Then it will move on to a new destination.