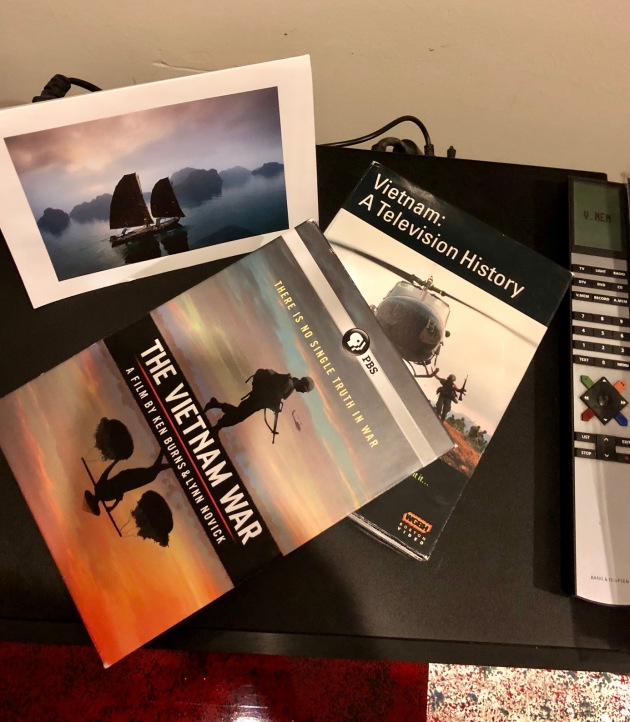 Collage: 30 hours of TV-time on war in Vietnam, a B&O vintage remote, and the postcard version of Catherine Karnow’s stunning Halong Bay photo.

*This blog title “the war nobody won” is borrowed from Stanley Karnow’s famous and controversial prologue in “Vietnam – a History.”
The recent launch of the Ken Burns/Lynn Novick 18-hour documentary on ‘THE VIETNAM WAR’ has prompted me to hole up quite a few Hanoi nights over the past month.
Subsequently, I added a 13 hour re-watch of the original  ‘VIETNAM – A TELEVISION HISTORY’, done almost 35 years ago.  It has been absolutely fascinating.
Both series are published by PBS, but very different in their approach to the war(s) in Vietnam. Burns/Novick are on a mission to captivate the viewers with a dramatic and well researched narrative, based on wartime footage (some it never seen before, I believe) and retrospective interviews with former combatants, peace activists, victims and relatives in Vietnam and in the US.
No doubt, it has been an enormous task to put this documentary together.
It is all spiced up with a continuous score of greatest hits from the US pop music charts during the war years. The narrator is intense and (melo)dramatic. The obvious ‘story-telling gimmicks’ seem a bit too much, but if you make it to the end, you will walk away feeling wiser on the war and its far reaching implications 40 years on.
However, one very big issue is strangely missing from the documentary: The legacy of the war, i.e. the long term effects of Agent Orangeand the enormous amounts of UXO’s, unexploded mines and bombs, which are still killing people in Vietnam as well as Cambodia and Laos, 40 years after the war.  Apart from a single sentence on Agent Orange, the documentary completely ignores the terrible, lingering consequences for thousands of Vietnamese and US and other allied veterans, who ‘humped the boonies’ in the sprayed areas during the war.
Likewise, the efforts carried out by VN veterans to assist the Vietnamese with UXO clearance are also left out. One should think that initiatives like the Project Renew would deserve attention in a new documentary on the war in Vietnam. 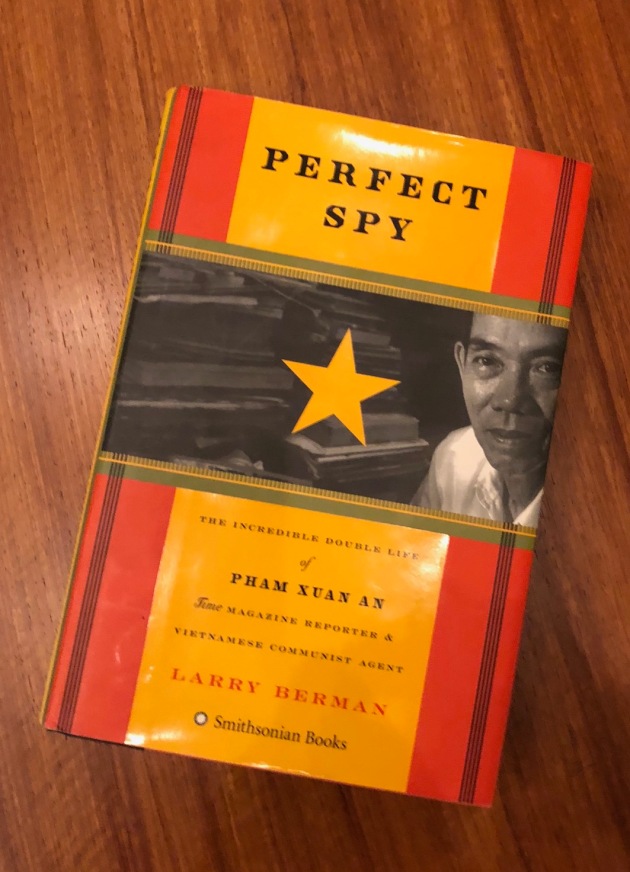 The story of the Hanoi Spy legend Pham Xuan An would have suited well with the other ‘human interest’ stories in the Burns/Novick documentary.

Considering the Burns/Novick fascination of ‘human interest’ stories, it is also surprising, that the role of the legendary Hanoi spy, Pham Xuan An is not mentioned at all.
Being a trusted advisor of the US Ambassadors and several senior military officers, An supplied the North Vietnamese and the Southern Insurgents with the vital intelligence to prepare for the 1968 Tet  Mau Tan Offensive, the massive attack against more than 100 cities and other targets in the South.
An even managed to become bureau chief for Time Magazine and cleverly manipulated the foreign press corps in Saigon during daily informal chats at his favorite café. Only several years after the war, it was disclosed that Pham Xuan An was also a colonel in Hanoi’s military intelligence apparatus.
It also surprising that Burns/Novick refrain from bringing post-war revelations into focus. On example: They are spending quite a bit of airtime on the1968 My Lai massacre without bringing this horrendous act into perspective.  Once again, we get the hero-and-villain story about Lieutenant William Calley, who ordered the killings, and the courageous helicopter pilot, who managed to stop the massacre after 504 old men, women and children had been killed.
Why not tell the bigger story about, what really went on in Quan Ngai province, when 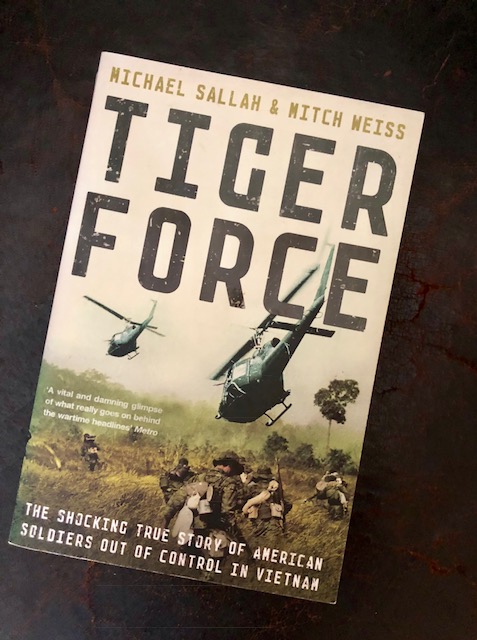 ‘Biased’
Predictably, Burns/Novick have received quite a bit of flack for being biased, primarily from the ‘we-fought-an-honourable-war’-opinionists in the US. For obvious reasons, the Nixon Foundation is highly critical in published comments to the episodes, dealing with the Nixon/Kissinger years. But by and large, to this blogger the Burns/Novick documentary seems to be a rather fair assessment of the consequences of Nixon’s ‘peace with honour’ strategy, and the enormous loss of lives, which followed.
An obvious weakness of the entire Burns/Novick documentary (as opposed to the PBS-predecessor) is that they are without firsthand knowledge of the war in Vietnam and therefore at complete mercy of their sources.
The substance of several episodes seem to be largely based on interviews with wartime journalist Neil Sheehan and his Pulitzer-winning book ‘A Bright Shining Lie’.  There a very few retrospective interviews with key decision makers, partly for the simple reason that most of them are dead now.
These weak points make the original PBS-series appear all the more stronger, even so many years after it was made. The producers of ‘Vietnam – a Television History’ contracted one of the war’s most eminent journalists, Stanley Karnow (Time Magazine) as chief correspondent for the series.
Amazing network
Karnow’s  amazing network of sources on all sides is the backbone of every episode. During the war he had regular access to the highest levels of US political and military decision-making, ranging from ‘kitchen-chats’ with President Kennedy to the inner circles of the Pentagon and the intelligence agencies.
This also made Karnow a target of criticism for being biased in favor the US in his coverage during and after the war. For the very same reason left leaning professor Noam Chomsky and others fired away on the original PBS documentary.
The US-bias attacks on Karnow did not stop the Hanoi leadership from allowing him back in 1981. He became one of the first American journalists to make a first hand report from post-war Vietnam. PBS and the viewers would benefit enormously from the sources, which Karnow had developed among the senior decision makers in Hanoi.
The Vietnamese authorities gave Karnow full access to almost everyone on his bucket list, except the enigmatic wartime chief negotiator Le Duc Tho and Hanoi’s master spy Pham Xuan An.  (Coincidentally, fellow reporter Jørn Ruby and I received the same khong duoc – “no-no” on the same requests,  when walking a few years later in Karnow’s footsteps through the Hanoi maze of government offices).
Nevertheless, virtually all the sources you are missing in the Burns/Novick documentary, you will find in abundance in the original PBS-series.
Compelling interviews with all sides
The 35 year old documentary is by no means outdated. The analysis stands clear and solid, along with in-depth interviews with some of Hanoi’s famous warlords,  General Vo Nguyen Giap, Prime Minister Pham Van Dong and Foreign Minister Nguyen Co Thach.
Representing the US side, Secretary of State Henry Kissinger, General William C. Westmoreland, and CIA chief Willam Colby are among those sharing their reflections on the war that led to so much death and suffering in Vietnam and in the US.
My recommendation to fellow Vietnam nerds, on which documentary to hole up with: Take both of them with you. If this is not enough, both documentaries come with just as compelling book companions, which are equally different in approach.
The Burns/Novick book is glossy and coffee table-size with lots of dramatic color shots.  The text is a quality compilation of works by real Vietnam expert writers.
Stanley Karnow’s classic is an eminent brick of a book. 800 pages are waiting for you, and once you are done with it, you will be looking for a volume II. 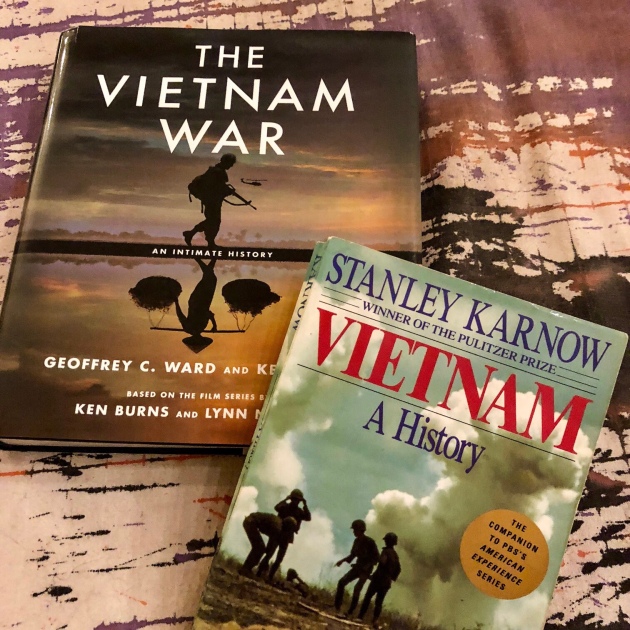