The cast of characters could have been straight out of Coppola’s Apocalypse Now:

This is not the first time Kurlantzick digs into the darker CIA secrets.

In The ideal Man – the tragedy of Jim Thompson and the American way of war, Kurlantzick put forward a solid attempt to uncloud the decades long mystery of former intelligence agent and precious silk manufacturer Thompson’s legendary life and sudden disapperance during a morning jungle hike.

In the book about Thompson, Kurlantzick disclosed fascinating details about the unfortunate symbiosis of arrogance and ignorance in CIA corporate management, when it came to the complex realities of SE Asia.

However, Kurtlantzick ended up with more questions than answers for obvious reasons, given the thick clouds of secrecy regarding the Thompson’s repeated showdowns with his former masters and his later mysterious disappearance.

In Kurlantzicks new book on CIA’s decade long secret war in Laos, he does not leave a stone unturned in this compelling and scary documentation on, how the war in Laos turned the relatively marginal and small-budget Office Of Strategic Services (OSS) into the CIA, in turn to become the world’s biggest killing machine, commanding a hundred thousand paramilitary experts and guerillas in Laos – and Air America the biggest air fleet in the world as well.

More than 80 million unexploded bombs are left in Laos. Visitors are advised to stay on the cleared paths on the vast Plain of Jars.

The numbers are staggering: Laos was bombed by CIA operated airstrikes every nine minutes for a decade, until it all ended with the US withdrawal from the SE Asia battlefields. 850.000 bombing missions were carried out over Lao territory. 20 tons per capita.

Ever since then, tiny Laos holds one undisputed world record – as the most bombed country per capita in the global history of warfare.

There were three reasons for this monstrous act:

Here is Lath, who guided me around in COPE, a small rehabilitation for UXO-victims in Vientiane, the capital of Laos. Five years earlier Lath had picked up one those small anti-personel bombs, exhibited here. The explosion tore off his hands and blinded him for life.

In the process, so-called ‘collateral damage’ – killing of civillians – skyrocketed to enormous proportions.  Several US relief workers in Laos tried to alert congress as well as US media to the rapidly growing, undeclared war in Laos.  Stories did appear now and then in the media, but it never caught real public attention.

It played out the same way in Congress.  The secret bombing campaigns were managed by the CIA with the involvement of several US ambassadors.  One of the esteemed diplomats, ambassador William Sullivan, went as far as to actually taking over the management of the war effort, sidelining the CIA chief in Laos.

According to Kurlantzick, Sullivan’s personal involvement did not prevent him from denying the US involvement in the Lao war under oath at congressional hearings.  He got away with it. Upon the completion of his tenure in Laos, Sullivan went on to become one of  Secretary of State, Henry Kissingers trusted advisors on the war efforts in Vietnam, Laos and Cambodia.

The devastating consequences of the Lao bombings  have lingered on for decades. Still today, Laotians are being killed and maimed by UXO’s – unexploded bombs. An estimated 80 million of the small anti-personnel bombs are believed to be scattered all over the country. They are still taking their toll, mostly on unsuspecting children, who picks them up as toys.

President Obama pledged USD 100 mio. in support to UXO-clearance during his visit to Laos in 2016 – the first ever of a US president.  Certainly a nice gesture, but a very small drop in the ocean.

Even though the human suffering in Laos  is a story, which deserves to be told again and again, the bigger perspective in Kurlantzicks book is an even more disturbing part:

The war in Laos dramatically changed the CIA from a mere intelligence agency with a very limited budget to a virtual killing machine with enormous resources – a machine that has been launched with sketchy justifications again and again ever since – with only few requirements of public or political accountability – in virtually every corner of the world.

The strike against Allende’s Chile, The Iran-Contra scandal, Iraq, Syria, Libya, Somalia, Congo, Afghanistan – you can add to the list yourself.  Over and over again the same denials or sketchy justifications of the undeniable.  The occasional public scandals have not put much limitation to the defacto autonomy of the CIA.

These days, any collateral damage can probably be explained away by a reference to the global war against islamic extremism.  The members of the different oversight committees in Congress and the Senate have always been sensitive to being exposed as naive or – even worse – being “sympathetic with the enemy”.

With CIA’s track record in Laos and beyond, it is very disturbing indeed – not least with the mindset of those elitist individuals who may exert some direction on this organization, whose operations are mostly  beyond parliamentary control or public insight – like former Secretary of State Henry Kissinger, who was very much in charge along with President Nixon during the wars in Vietnam, Laos and Cambodia. 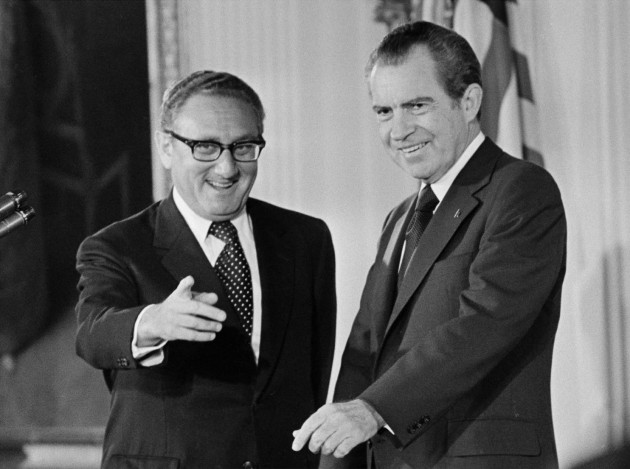 Kissinger and Nixon both denied consistently that the US waged a secret war in Laos.

Kissinger probably never lost a minute’s sleep over the human suffering he unleashed, while working for bigger goals. When he was confronted with the huge civilian casualties on the Plain of Jars, where thousands of families with a 700 year history were wiped out: “You mean, the Laos thing,” Kissinger responded and  dismissed the tragedy as a minor issue.

Kissinger did have a case, if you look at proportions. ‘Only’ some 800 CIA operatives and contractors were killed in Laos, and Lao casualties were probably only close to a million. In neighboring Vietnam more than 58.000 Americans laid down their lives along with an estimated 4 million Vietnamese casualties.

Even though the US intervention in Vietnam, Laos and Cambodia was a failure with huge consequences for millions of people, including US citizens, it may be argued that it all happened out of the best and loftiest intentions – to save the world from Communism.

It also a fact that it never became a personal failure for the individuals who managed the ‘Laos Thing’.  Kurlantzick documents how the Laos war was internally evaluated as a CIA success story.

Internal CIA assessments argued that the war in Vietnam would have been lost years earlier, if the CIA had not managed to tie down an estimated 70.000 North Vietnamese elite troops in a ground war in Laos with the ferocious Hmong guerillas, funded by the CIA and led by Van Pao, the legendary war lord, who later was evacuated to USA along with his surviving guerillas and their families.  According to the CIA rationale the incessant bombings were essential support to the war on the ground.

As a consequence of this ‘succes story’ Laos became a career platform for several CIA senior operatives, who then went on to prominent corporate positions at Langley or as station chiefs around the globe, where they continued a vast number of activities, often of a paramilitary nature.

He deserves great praise for bringing the implications of ‘the Great War in Laos’ to the public’s attention.

Joshua Kurlantzick: A great place to have a war – America in Laos and the birth of a military CIA. 323 pg. Simon&Schuster.