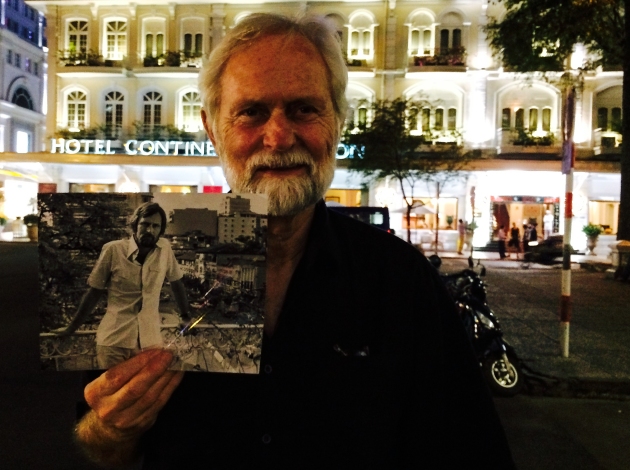 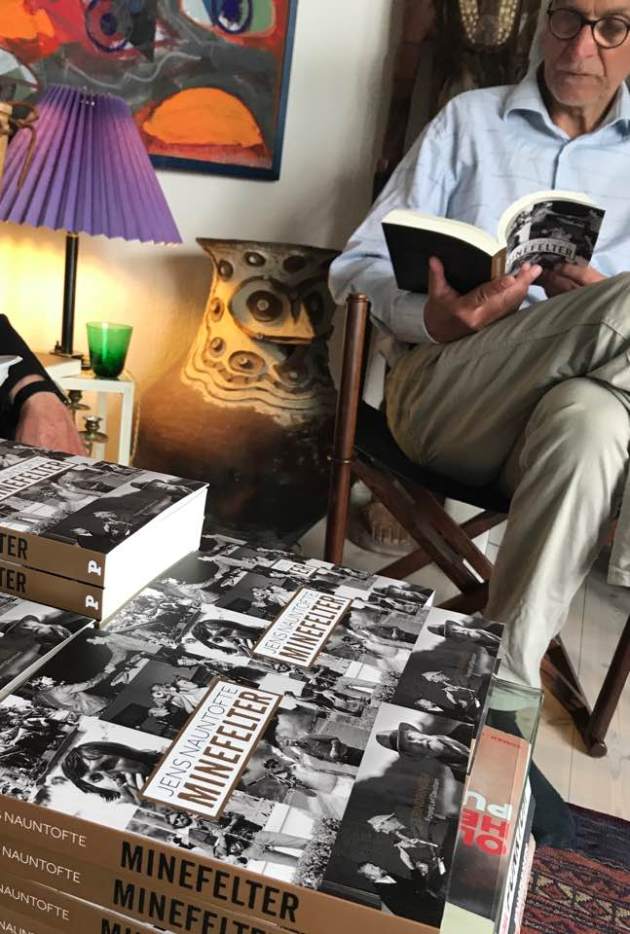 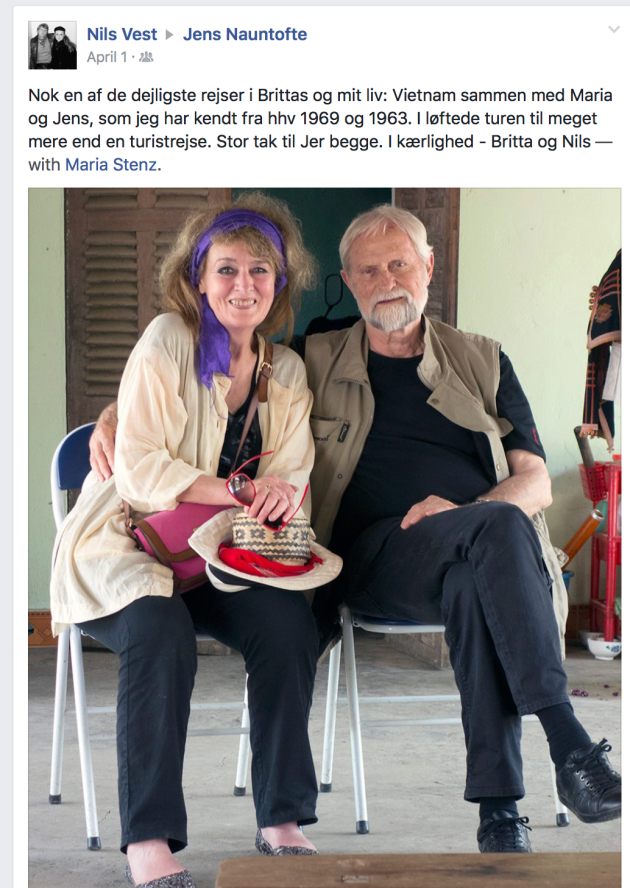 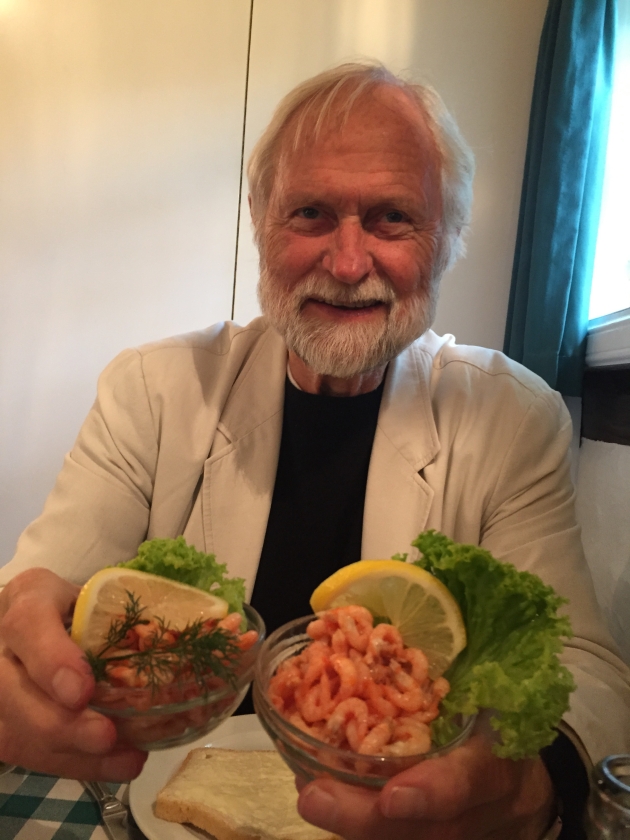 Against all odds, Lê Minh Châu has become an artist in his own right. 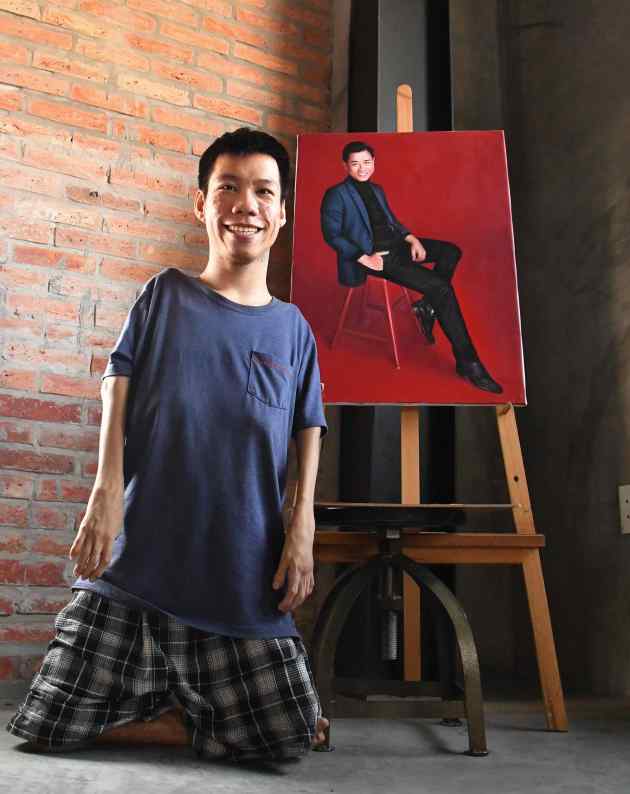 Lê Minh Châu (25) softens his clear message with a disarming grin, once again stressing his point by tapping on his cigarette pack with his tiny, disfigured fingers right on that black and bold lettered warning SMOKING KILLS.

Yes, smoking kills – and so does Agent Orange, the dioxin contaminated chemical, which the US forces used to defoliate the dense Vietnamese jungle during the war. During 9 years, from 1962 to 1971, 72 million liters were sprayed over Southern and Central Vietnam. You can check this link  A letter to Obama for an exhaustive essay about the consequences then and now for Vietnamese and American victims of Agent Orange exposure.

In the past 30 years I have met scores of Agent Orange affected families all over Vietnam and recorded more pain, more misery, and more fear than you can imagine.

Never before have I encountered someone like Lê Minh Châu.

We meet up at Café Yumi, a trendy one of its kind in modern Ho Chi Minh, District 2.  Chau is sort of a typical Saigon youngster, sitting there sipping Caphé Sua Da (ice coffee). His laptop is open and idle.  During the conversation, Chau mostly sticks to the smartphone next to him, sms’ing now and then, while we talk. 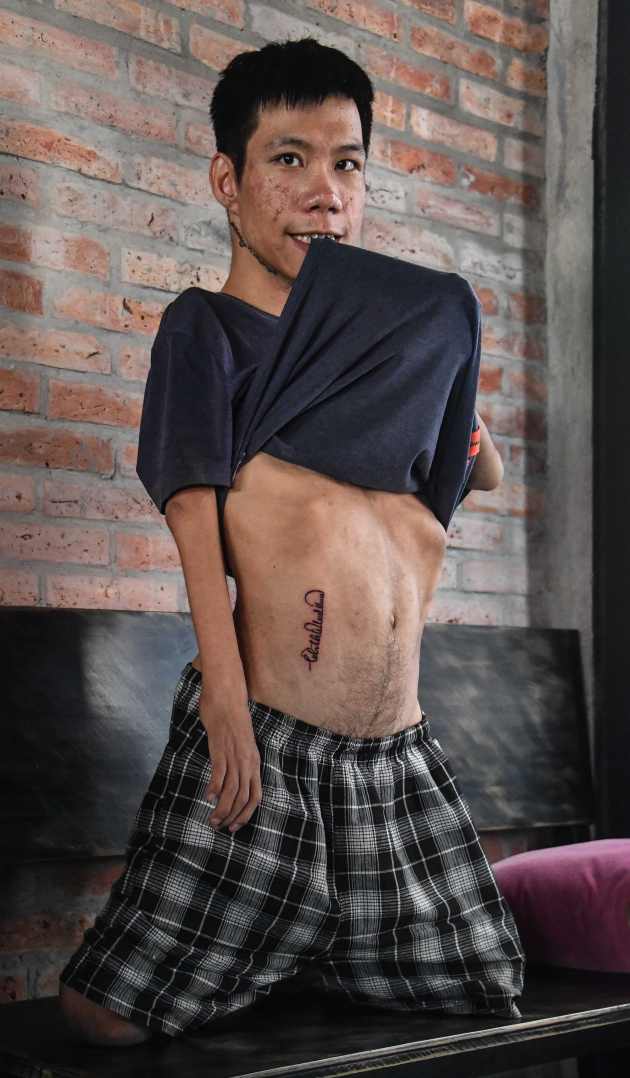 Châu’s beautiful smile frequently turns into a mischievous grin, serving as a magnet for your attention. Somehow you forget his disfigured limbs – that is until he starts moving around, and quite adeptly so.

Châu wants me to take a photo of his new tattoo: Yesterday, he had his own signature done on his belly.  Châu jumps up on the café bench, and I lie down on the floor to get a good angle. Châu’s hands won’t really help him pull up the t-shirt, so be bends forward getting hold of the fabric with his teeth – throwing in that lovable grin in the process.  It looks like the tattooed skin must be quite sore with that reddish shadow around the thick black lettering.

I want to talk with Châu about his other tattoos, in particular the one on the right side of his throat. Courtney Marsh, it says, in thick black italics. A bit hard to read.

“I had it made that way so that most people cannot really see exactly, what it says. I want them to ask, so I can tell the story again about Courtney – the woman who will always be in my heart. Courtney knows why I put it there. She helped me change my life, and I changed hers, too.” 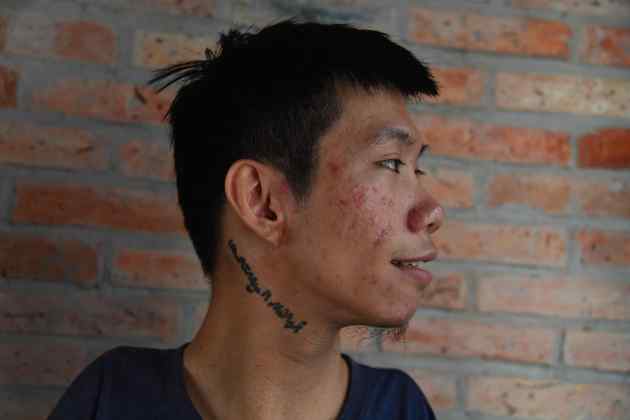 “Courtney will always be in my heart.”

Courtney Marsh is the American film maker, who made Châu world famous with her documentary Chau – beyond the lines.   My good friend, the Agent Orange campaigner for decades, dr. Charles Bailey calls it the best documentary ever made about About Orange. As Charley says: “I know, because I have seen them all.”

‘Beyond the Lines’ has received a staggering amount of awards, among them an Oscar nomination, and screenings around the world, including the UN. The current US ambassador to Vietnam, Ted Osius worked the diplomatic ropes to promote the fim.

For Agent Orange veteran campaigners, this is quite a development, considering that it used to be an important objective for US diplomacy to suppress any support to highlight the legacy of Agent Orange in Vietnam. That all changed during Obama’s presidency.  In May 2016, he rock’n rolled like a superstar through Vietnam – addressing the painful Agent Orange issue officially in a speech to the Vietnamese people. That was a first ever for a US President.

No politics, please “I love Courtney’s film because it is not about politics. It is about me, my life, my art, my dreams, my hope.  I have given many speeches, after the film made people know about me. I speak about harmony, peace and hope. Not politics!”

Châu pays tribute to the film with another tattoo, located on his neck.

“I want to talk a little more about Courtney. How she moved into my heart. How we are  linked.  Her name and my name start with a ‘C’. That’s good.”

“I met Courtney a long time ago, when she came with a group of American film students to the Peace Village – the care center where I stayed along with other disabled children. The Americans – I think there were 10 of them – wanted to make a film about us, but they could not agree on the project.

I learned from Courtney that the project would be cancelled.  I pleaded with her not to give up, and she agreed to try and make the film. It took us eight years to finish, but it was worth all our efforts. I love the film, and I love Courtney and the producer Jerry Franck for what they did. It changed so much for us.”

With Châu’s celebrity status new experiences has entered into his life. He was invited to the UN in New York to the screening of the documentary. At the Metropolitan Museum of Art Châu beamed at his first sight of an original Picasso. Courtney Marsh recorded some fascinating footage of Châu in his wheel chair, totally absorbed in the works of the old Spanish master. 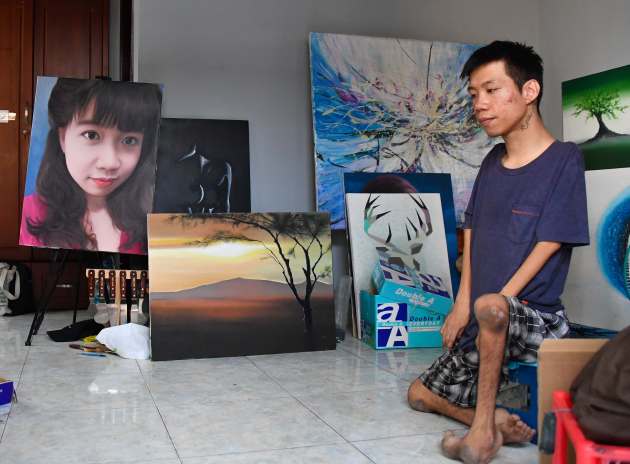 The coffee-break has come to and end. Châu is busy today and invites us along to his live-in studio behind the café.

“Having my own place is very important. I left the care center, because I do not want other people to take care of me. I can do most things myself – and I want it to be like that.”

The studio is evidence of Châu’s amazing creative energy.  Paintings are in the process everywhere. Portraits, landscapes, star studded night skies, butterflies and cats, abstracts.  Completed works are stacked up against the walls.

Sushi is my favorite Châu is kind of hungry. “I skipped lunch,  but these chips will do for now.”

Watching Châu open a bag of chips gives an immediate insight into his daily challenges. He clamps the slippery bag down with his one disfigured arm, clutching a small razor sharp knife with the tiny hand on his other arm,  trying to puncture the bag. He keeps loosing the knife on the floor. Looking at Châu makes it increasingly hard for me to resist the urge to do it for him,  but I know by now that such a small gesture would be very unwelcome.

Finally, Châu gets a chip out of the bag, the mischievous grin flashes again, as he swallows the first one.  Then he crunches on.

He obviously reads my thoughts that he really should have a more healthy lunch and says: “Actually, I like sushi better than chips.” The grin is there again. 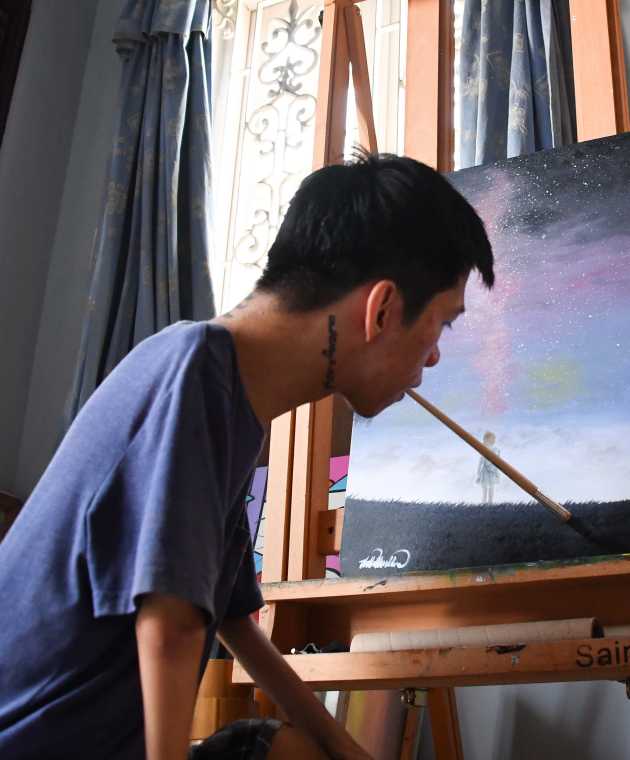 Châu gets ready to work. An almost complete painting is on the easel. It is from his visit to Sapa in Northern Vietnam. A small ethnic minority girl is seen from the back staring at the night sky.

“I love the clear night sky in Sapa. I want to paint it again and again.”

Châu picks up a brush and dips it into black color finalizing the grass below the feet of the little girl. The brush is moving quickly and firmly on the canvas.  Châu’s strong jaws work just as well as any artist hand.

“I have painted since I was nine years old. In the beginning I tried with my hands, and it was very difficult for me. I saw other disabled children in the Peace Village using their feet, making beautiful calligraphy, but my feet were to weak for that. So I got the idea to use my mouth.” 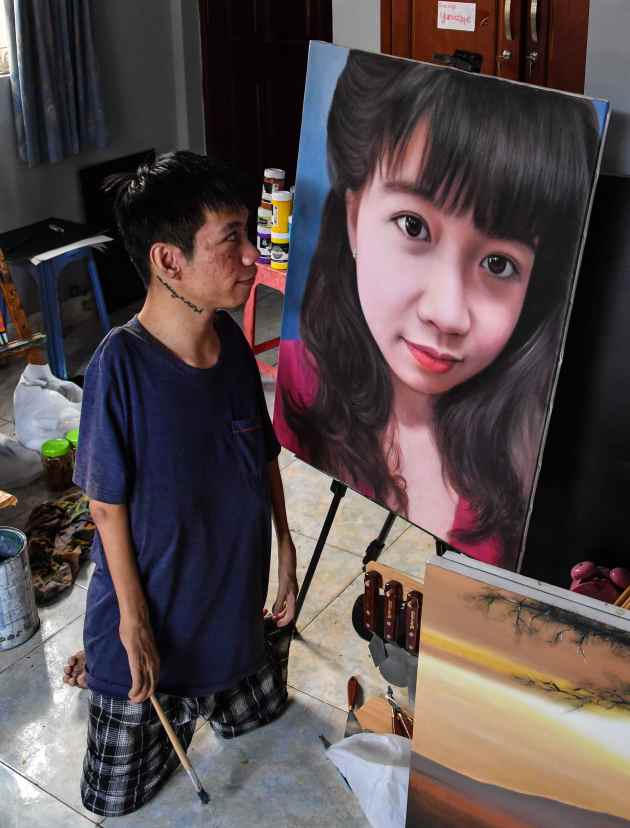 “Who is this?” I ask, pointing to a portrait of  a pretty young girl standing on another easel on the floor. Châu agrees to move over to her so I can get a shot of him and the girl.

“This is really nothing special. I did this by customer order. I am not so interested in making portraits. I do a lot of other things of my own choosing.”

“At the moment I have six students, ranging from 12 to 30 years of age. One of them will be here very soon for her lesson.”

In comes 22 year old Nguyen Thi Phuoc Thao – pretty and shy as most young Vietnamese women.  She sits down in front of the easel and gets out her smart phone with a photo of a complete version of the painting that she is working to copy with her own brush. 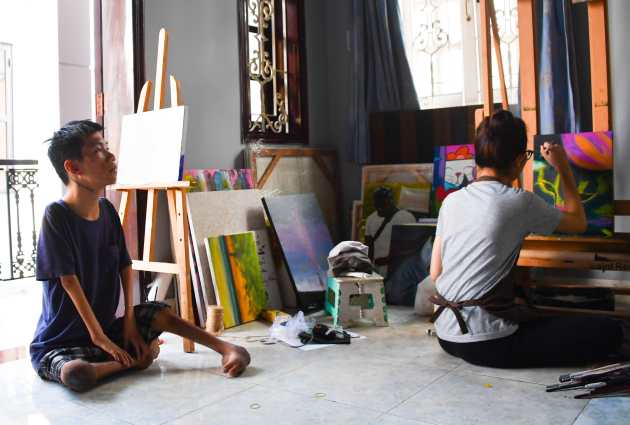 Thao picks out her half finished painting from the stack next to her and puts it on the easel. It is the face of a cat – in a multitude of colors.  Châu sits quietly behind her for a while, observing her strokes carefully. He is not entirely happy with Thao’s work and moves closer to explain how to use the brush properly. Still not satisfied he then takes the brush from her, puts in in his mouth and demonstrates to Thao how to apply the paint evenly. 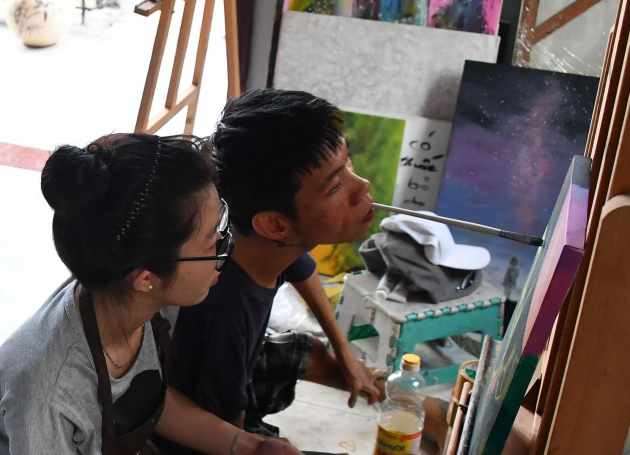 Thao has made her way to Ho Chi Minh City from Vietnam’s capital Hanoi, some 1.600 km to the north.  She learned about Châu during the Vietnamese media frenzy, when ‘Beyond the Lines’ were nominated for an Oscar.

“I connected wth him on Facebook, and he accepted me as a student. I am very happy with my lessons. Châu is a very good teacher,” Thao says. 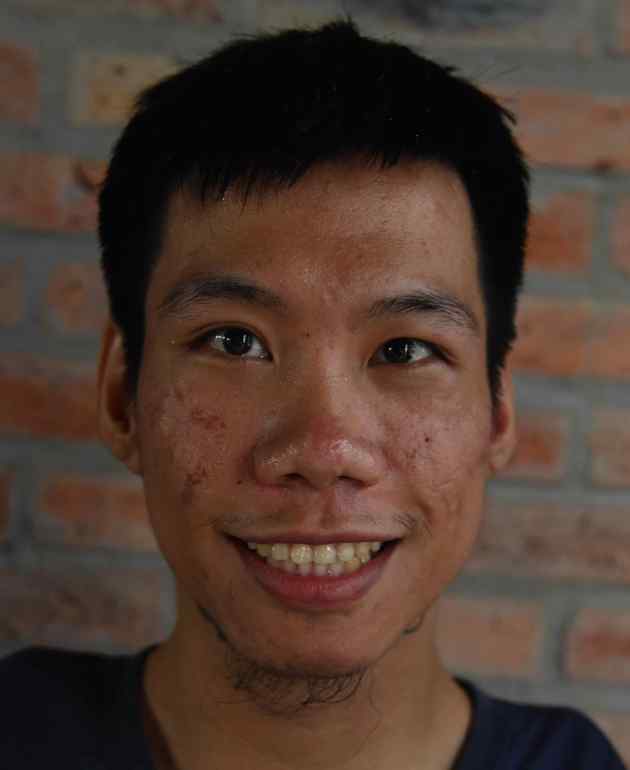 Body painting coming up Châu’s own painting, six art students, and frequent guest speaking assignments and interviews – a full agenda for most people. Not for Châu.

“I have been studying Japanese for three years. I can converse in Japanese now.” The grin is back again.

“Art is my main thing, though. This is what I want to do with my life. I am starting a new art form for me now.”

Châu is sizing up Hien, my strikingly beautiful translator.

“I will begin body painting next week. Hien, you can become a very good model.”

Lê Minh Châu paintings are one the market. You can order specific works, if you like.

For more on Lê Minh Châu and ‘Beyond the Lines’, here is a link to the compelling interview with director Courtney Marsh and dr. Charles Bailey.

The essay above mostly refer to Châu by his first name. In Vietnamese the family name comes first. 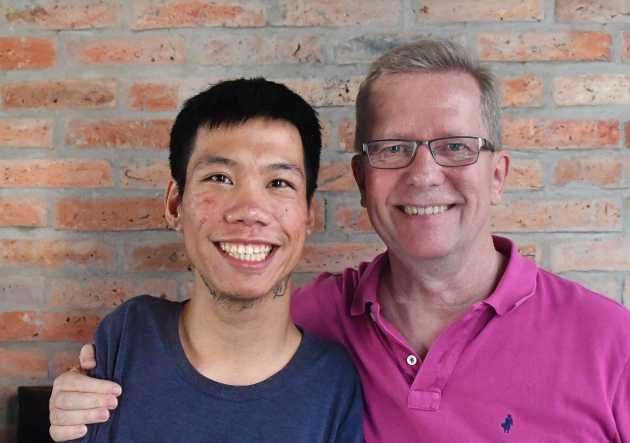