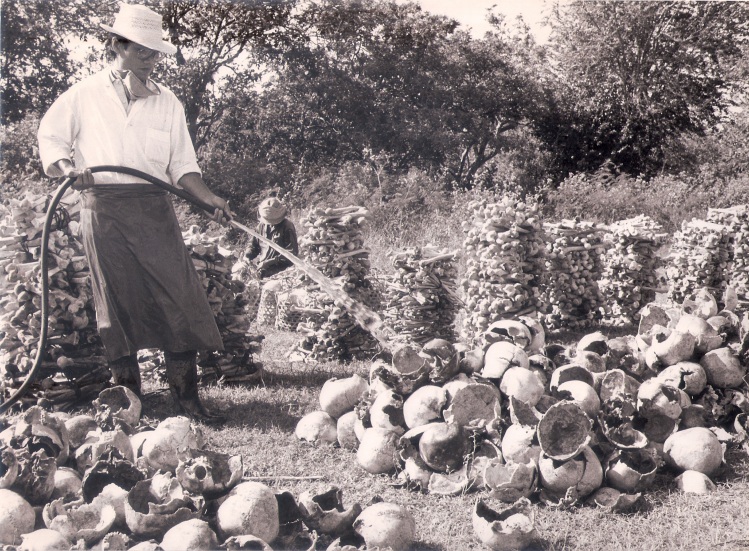 One of the killing fields outside Cambodia’s capital being cleaned up. 2-3 million people perished under the Khmer Rouge Regime 1975-1978. The Vietnamese army ousted Pol Pot in January 1979. (Photo: Ole Johnny Sørensen)

This week, 40 years ago, Pol Pot’s Khmer Rouge had settled in as the new rulers of Cambodia. The US-backed Lon Nol regime had fled, and King Sihanouk had been confined to his palace, loosing his beloved saxophone in the process. Then KR started to empty Phnom Penh and march the citizens at gunpoint to the countryside, killing hundreds of thousands as the revolution moved on.

When photographer Ole Johnny Sørensen and I arrived a decade later, a strange sight met us outside Phnom Penh. At a distance, it looked like they were watering cauliflower fields. As we came closer, it dawned on us that they very cleaning the remains of the victims of Khmer Rouge.

Johnny focused on his job, while I vomited behind the car. The capital itself still seemed like a city, which was way too big for its population.

Very few cars roamed th streets, some shops open here and there with household goods smuggled in from Vietnam and Thailand. A lone elephant at the Wat Phnom pagoda – and then dozens of one-legged mine victims begging for food. No hotels seemed to be open for business, we were put in the former governor palace – a huge concrete structure that seemed empty. Candle night dinners at night, because there was no power.

The so called Russian Market had lethal commodities for sale – guns, AK 47’s, even hand grenades. This was Cambodia a decade after Pol Pot’s holocaust. What then followed, I will dwell on in a later blog.